CHICAGO, June 15, 2022 /PRNewswire/ -- United and United Airlines Ventures (UAV) today announced an investment in and commercial agreement with Dimensional Energy, another step forward to reach United's 100% green net zero commitment by 2050, without the use of traditional carbon offsets. Dimensional Energy's novel technology removes the need for fossil fuels, converting carbon dioxide and water into usable ingredients for the Fischer-Tropsch process – a nearly 100-year-old proven technology used to produce fuels from coal or methane. While facilities around the world continue to use Fischer-Tropsch to produce fossil fuels, Dimensional will be one of the first to use it to produce sustainable aviation fuels (SAF). 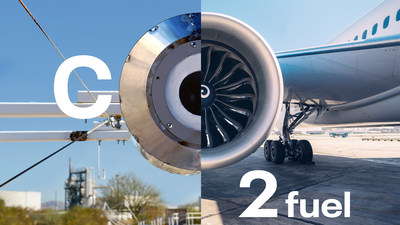 Under the commercial agreement, United has agreed to purchase at least 300 million gallons of SAF over 20 years from Dimensional. This agreement further cements United's status as an airline industry leader in sustainability. United's SAF agreements represent the largest volume of SAF of any airline over the next 20 years, based on publicly announced agreements.

"Sometimes you have to look to the past to solve new problems, and we recognize that decarbonizing air travel is going to require combining proven technologies, such as Fischer-Tropsch, with the latest advances in science and engineering," said Michael Leskinen, President of United Airlines Ventures. "As we grow our portfolio of companies like Dimensional, we are creating opportunities to scale these early-stage technologies and achieve United's commitment carbon neutrality by 2050, without the use of traditional carbon offsets."

Dimensional Energy was founded in Ithaca, New York, in 2016 and has spent the last six years refining its reactors and catalysts in both lab and real-world demonstrations. The company's early success led to its status as a finalist in the first Carbon Xprize, and in September 2021, global climate technology nonprofit investor Elemental Excelerator funded Dimensional as part of its 10th cohort, which led to the company's introduction to United. Dimensional has also received grants from the National Science Foundation and both the Department of Energy's ARPA-e and Solar Energy Technology Office (SETO). The company began construction on a carbon dioxide to fuels demo in Tucson, Arizona in 2021. Commissioning of the facility has already begun, and it is set to begin operation this July.

"Dimensional Energy is acutely focused on energy solutions that center communities who have been marginalized in the past century as infrastructure and energy systems were developed. We envision a world run on truly conflict-free energy that can scale to meet the global demand for hydrocarbon fuels and feedstocks. United's support of sustainable aviation fuel made from captured emissions is an important step in the aviation industry's pursuit of carbon neutrality," said Dimensional Energy Co-founder and CEO Jason Salfi.

Dimensional's technology can run on all forms of renewable energy. At the Tucson site, they are using electricity from the Arizona grid, which gets an increasing amount of power from local solar panels. Future plants are slated to use hydro-power, wind-power and rapidly maturing concentrated solar, which utilizes heat from direct sunlight.

Dimensional can also utilize carbon dioxide from a variety of sources, be it straight from industrial sites (like cement plants), from Direct Air Capture (a technology that can capture CO2 from anywhere in the world), and biological processes like fermentation and biomass gasification.

Today's announcement marks UAV's fourth SAF-related technology investment, but its first the pathway of power-to-liquids: which creates SAF synthetically without the constraints of feedstock growth that is prevalent in other biofuel pathways. Launched in 2021, UAV targets startups, upcoming technologies, and sustainability concepts that will complement United's goal of net zero emissions by 2050 – without relying on traditional carbon offsets. Over the last decade, United has built a first-of-its-kind sustainability-focused ventures fund. UAV's portfolio now includes SAF producers and other technologies including carbon capture, hydrogen-electric engines, electric regional aircraft, and urban air mobility.

Here are some of the ways United plans to make sustainability the new standard in flight:

Dimensional Energy envisions a world free from fossil fuel dependency. We use carbon dioxide emissions as a replacement for fossil carbon to make the fuels and products people use every day. Our team of subject matter experts come from all over the world with a shared purpose of making the sustainable materials necessary for a truly circular economy and bringing about climate justice for all. Our technology can produce energy locally, at a scale that can satisfy global demand without extracting resources or fomenting conflict. As we scale, our operations will center the voices of historically marginalized communities, and we are open to activists and journalists, whose perspectives we rely on to remain accountable and effective. Our practices are anchored in the seventh generation principle of the Haudenosaunee, whereby all decisions take into consideration the needs of a minimum of seven generations into the future. Learn more at www.dimensionalenergy.com.

This press release contains certain "forward-looking statements" within the meaning of the Private Securities Litigation Reform Act of 1995. All statements that are not statements of historical facts are, or may be deemed to be, forward-looking statements. Such forward-looking statements are based on historical performance and current expectations, estimates, forecasts and projections about our future financial results, goals, plans, commitments, strategies and objectives and involve inherent risks, assumptions and uncertainties, known or unknown, including internal or external factors that could delay, divert or change any of them, that are difficult to predict, may be beyond our control and could cause our future financial results, goals, plans and objectives to differ materially from those expressed in, or implied by, the statements. These risks, assumptions, uncertainties, and other factors include, among others, any delay or inability of United to realize the expected benefits of the transaction. No forward-looking statement can be guaranteed. Forward-looking statements in this press release should be evaluated together with the many risks and uncertainties that affect United's business and market, particularly those identified in the "Management's Discussion and Analysis of Financial Condition and Results of Operations" and "Risk Factors" sections in United's Annual Report on Form 10-K for the year ended December 31, 2021, as updated by our subsequent Quarterly Reports on Form 10-Q, Current Reports on Form 8-K and other filings with the Securities and Exchange Commission. The forward-looking statements included in this document are made only as of the date of this document and except as otherwise required by applicable law or regulation, United undertakes no obligation to publicly update or revise any forward-looking statement, whether as a result of new information, future events, changed circumstances or otherwise.